UB Revels in its Graduates and Students' Achievements

Professor Norris was speaking at an academic excellence award ceremony held at the University of Botswana on April 22, 2021 during which last year’s valedictorian, Ms Ruth Alfred, received a prize of P20 000 from De Beers Group of Companies.  During the same event, two students, Ludo and Tshegofatso Ntshiwa who are sisters, were recognised for scooping the BDC Business Den award of P500 000. 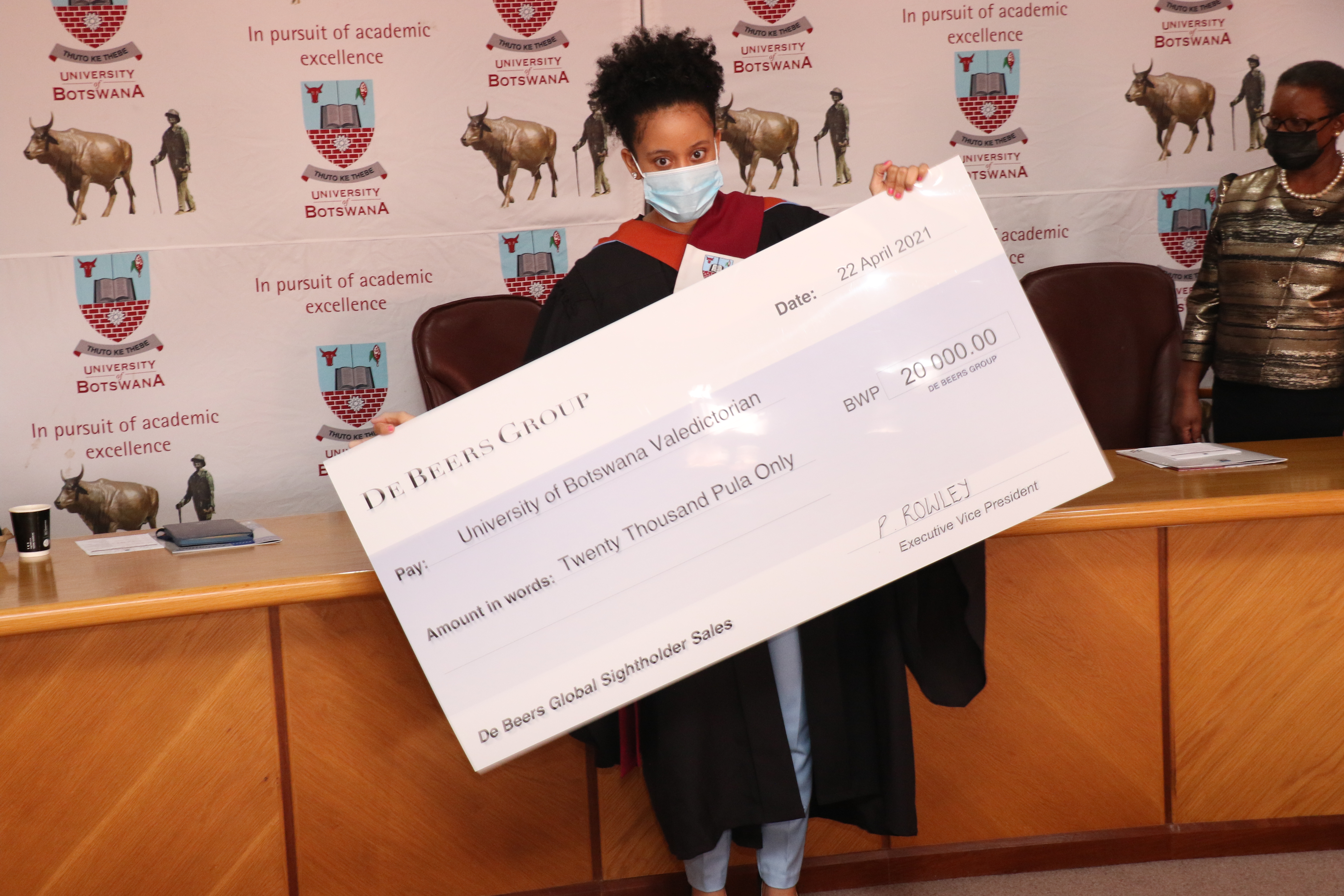 Professor Norris acknowledged the partnership between the University of Botswana, De Beers Group of Companies as well as BDC in that it was critical to building the country’s capacity towards a knowledge economy. He said the University was endowed with resources, both human and infrastructural, that the two organisations could utilise to propel the country’s economy.

Giving an overview of the awards, Acting Deputy Vice Chancellor for Student Affairs, Mrs Motsei Rapelana, thanked the two organisations for the support they had rendered UB over the years. Mrs Rapelana observed that for the last four years De Beers Group of Companies had been sponsoring the valedictorian prize. The prize is awarded to a student who has demonstrated an overall academic excellence for the duration of their studies. Last year it was awarded to Ruth Alfred who obtained First Class in the Degree of Bachelor of Finance.

On the other hand, Mrs Rapelana further acknowledged BDC for sponsoring student prizes since 2005. With regard to the P500 000 awarded to Ludo and Tshegofatso Ntshiwa, Mrs Rapelana said in addition to the cash prize, the students who jointly own ALOSA Group of Companies, have been offered mentorship training at BDC to expand their business. They will further receive assistance from the Citizen Entrepreneurial Development Agency (CEDA).

Ludo is a fourth year Urban and Regional Planning student while Tshegofatso is a fifth year Industrial Design student in the Faculty Engineering and Technology. Prior to the BDC award, Ludo won the CEDA University challenge worth P360 000, putting UB on the map and making it proud.

“It is this kind of excellence, that we found it fit to celebrate it today. This will also act as a motivation to other students to work hard and excel in their studies,” noted Mrs Rapelana.

De Beers Head of Human Resource, Mrs Matlhogonolo Mponang, said De Beers was offering Ruth Alfred a rare opportunity to work for a blue chip company. Mrs Mponang reckoned that it was now upon Ms Alfred to utilise the opportunity to catapult herself to greater heights. Mrs Mponang said as De Beers they were geared towards creating an enabling environment for brilliant young minds to flourish. “It is for people like us to plant trees and for people like you to sit under their shades,” she added. 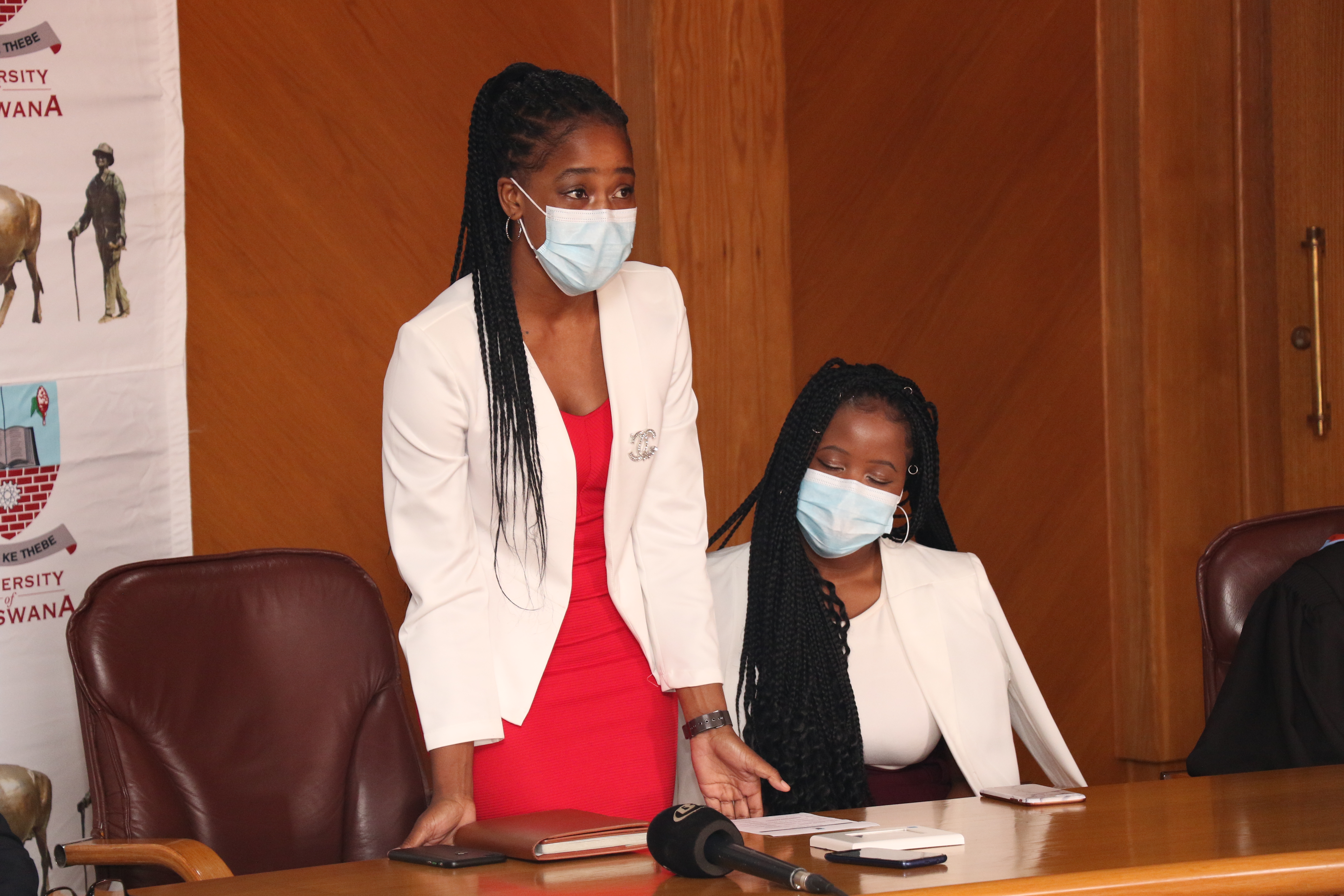 Meanwhile, BDC Senior Corporate Affairs Officer, Mrs Agodirwe Mapoka, explained that ALOSA Group of Companies was chosen from 244 applicants following a rigorous process of adjudication. Mrs Mapoka said ALOSA Group of Companies would be kept in the business den for 18 months during which BDC would provide constant monitoring and evaluation while playing a mentorship role until the company was ready to graduate. She encouraged the students to remain focused and grab every opportunity coming their way.

Giving a vote of thanks, Acting Deputy Vice Chancellor for Finance and Administration, Mr Lopang Mosupi, appreciated De Beers and BDC for their noble gesture and encouraged the awardees to take advantage of the opportunities to grow bigger. Mr Mosupi encouraged other students and UB staff to work towards excellence and the realisation of the University’s strategy of creating a future for the knowledge generation.