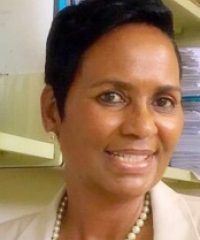 Prof. Rose Letsholo-Tafila is an Associate Professor of Linguistics at the University of Botswana. She holds a Bachelor of Arts degree (English) and a Diploma in Education from the University of Botswana. She read for a Master of Letters at the University of Edinburgh and holds a Ph.D (2002) in Linguistics (Syntax) from the University of Michigan (Ann Arbor). Her research is mainly on the syntax of IKalanga and Setswana, both spoken in Botswana. Over the past few years she has extended her research interests to Khoesan languages and she has a few publications based on llGana, a Khoesan language from New Xade. In addition, she also conducts social and ethnological based researches in the areas of language and gender as well as language attitudes. She has published in various international linguistics journals such as Lingua,Linguistic Analysis, Journal of African Languages and Linguistics, Language Matters, Per Linguam, Studies in African Linguistics, and Linguistiques & Langues Africaines among others. She has also published numerous book chapters which have been published in well-known publishing houses such as Palgrave, Taylor and Francis, OUP and CASAS. Recently she has extended her area of research to include understanding the problems of reading comprehension (the student and the teacher perspective) in primary schools. She was the editor of Marang: Journal of Language and Literature for five years from 2014-2019. She is a member of several journal editorial boards.